Eco-friendly sailing aboard a catamaran Saba 50

Preserving the oceans aboard a Saba 50

Nicholas & Catherine Hodgson, and their two daughters are the proud and committed Owners of the Fountaine Pajot catamaran “Lady Rolsyn”.

In addition to the wonderful images they share, the Hogdson family are also strongly committed to preserving the natural environment while cruising and to raise Ocean Preservation awareness to the sailing community through to power of social networks.

In this article, we shine the spotlight on what they are doing to help clean up the oceans and promote eco-responsibility during their cruises in the Med. They will also speak about people they meet and their best destinations and memories over the last three years of memorable sailing. 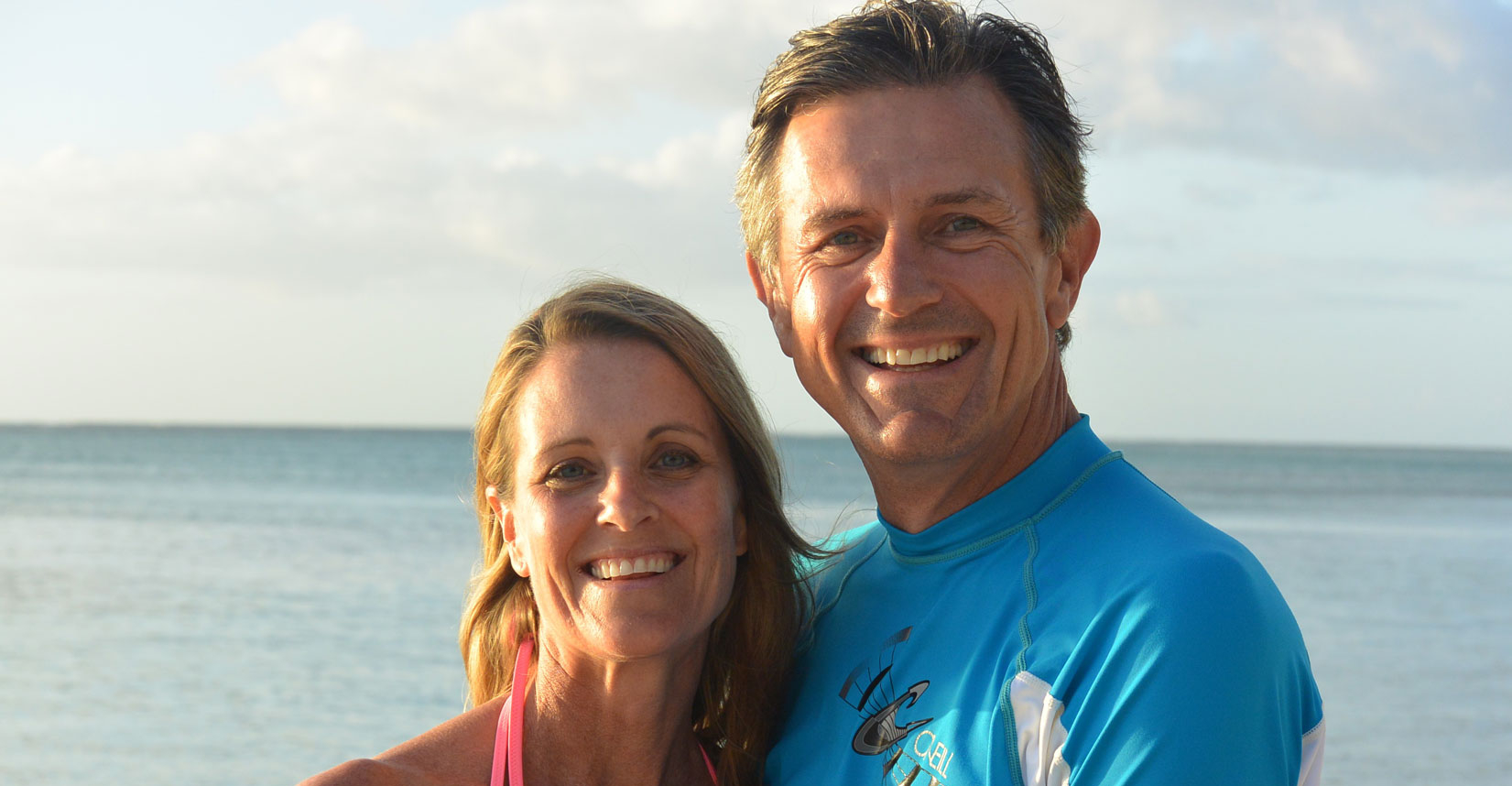 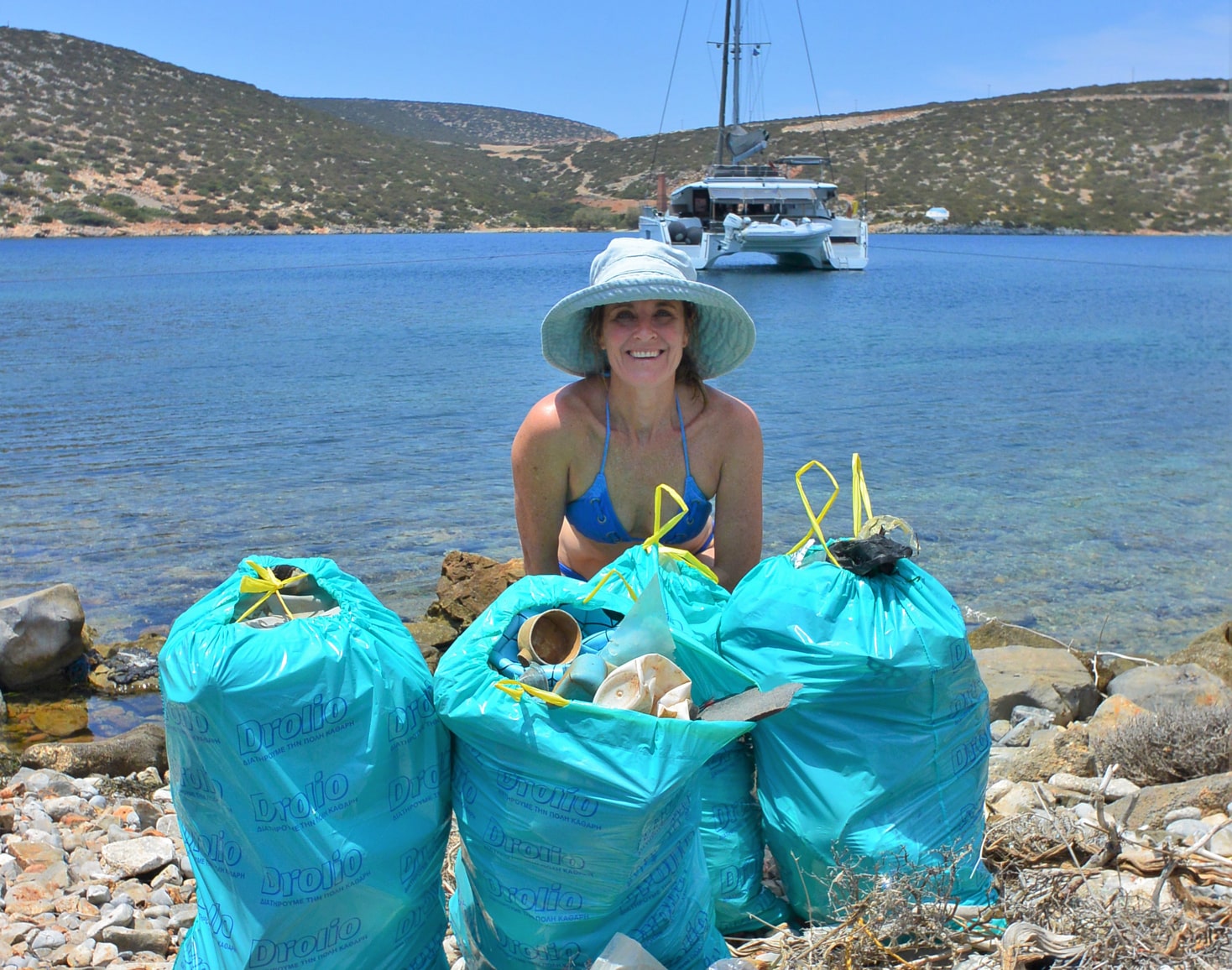 When did you decide to collect trash during your family cruises?

We were anchored near Russian Bay on Poros Island in Greece three years ago and had dropped anchor and reversed into a cove with two lines ashore.

While sitting looking at the shoreline we noticed a lot of plastic water bottles and other plastic trash washed among the rocks and onto the small beach. So I took one of our SUPs and some plastic bin bags and picked up all the rubbish I could find along the shore.

After that experience, I could not stop seeing plastic garbage so decided to keep going and pick it up whenever we saw it.

How did the « Trash Tuesday » idea come about? How did you share it with your family?

We are only one yacht and the difference we make is good for our immediate experience of the anchorage, but it is completely insignificant in tackling the ‘tsunami’ of plastic trash flooding into the world’s oceans right now. We decided to use social media to highlight the issue and try to encourage other sailors to join our cause.

We knew that if people were on a Facebook Group for sailors, they would not want to see pictures of plastic rubbish posted every day, so we came up with the idea of “Trash Tuesday”. I contacted administrators of various sailing groups on Facebook and asked them if they would agree to challenge other sailors to follow this initiative by posting our “Trash Tuesday” images, places and stories. And guess what? They agreed! Many sailors have now joined us in this venture. 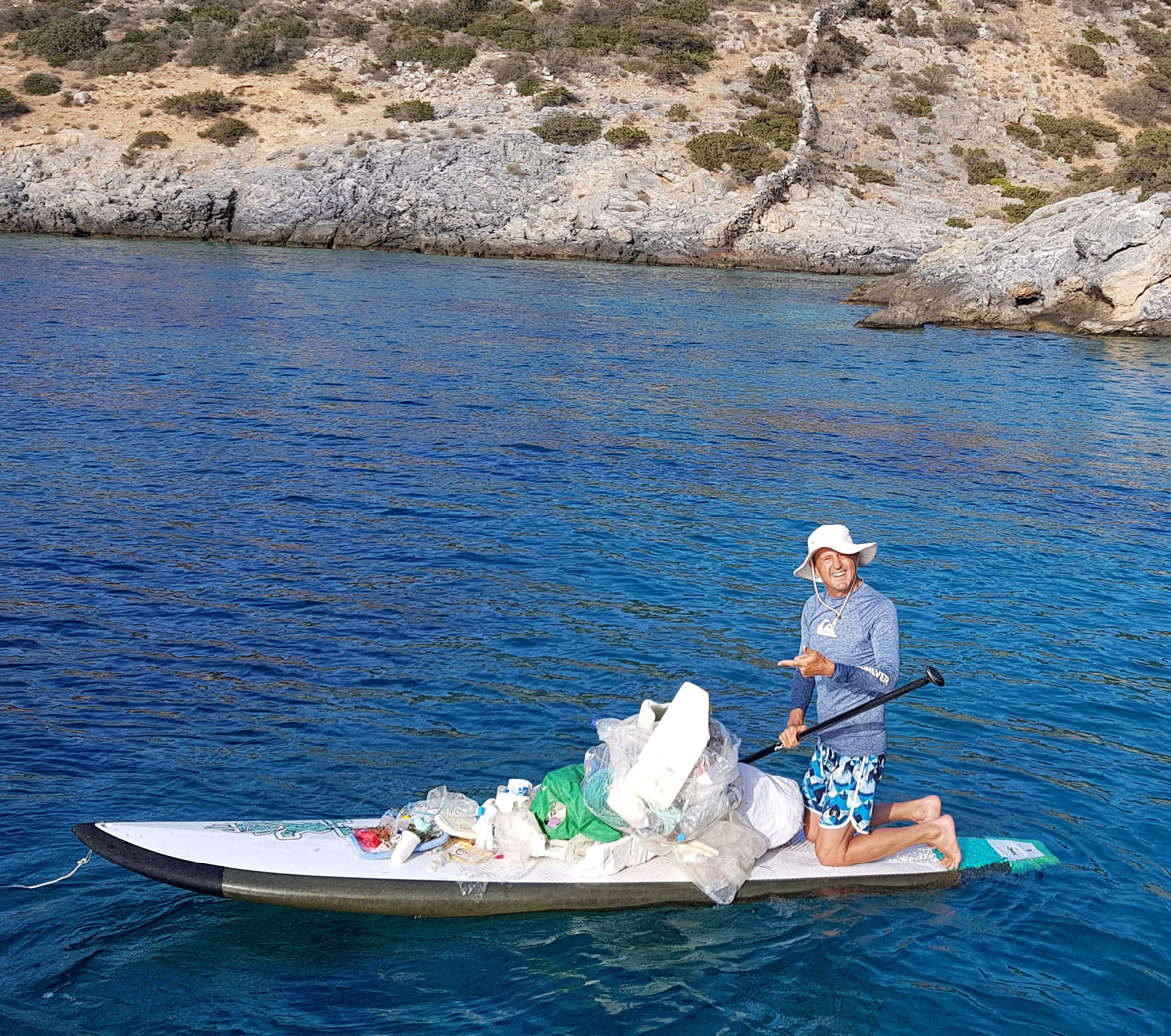 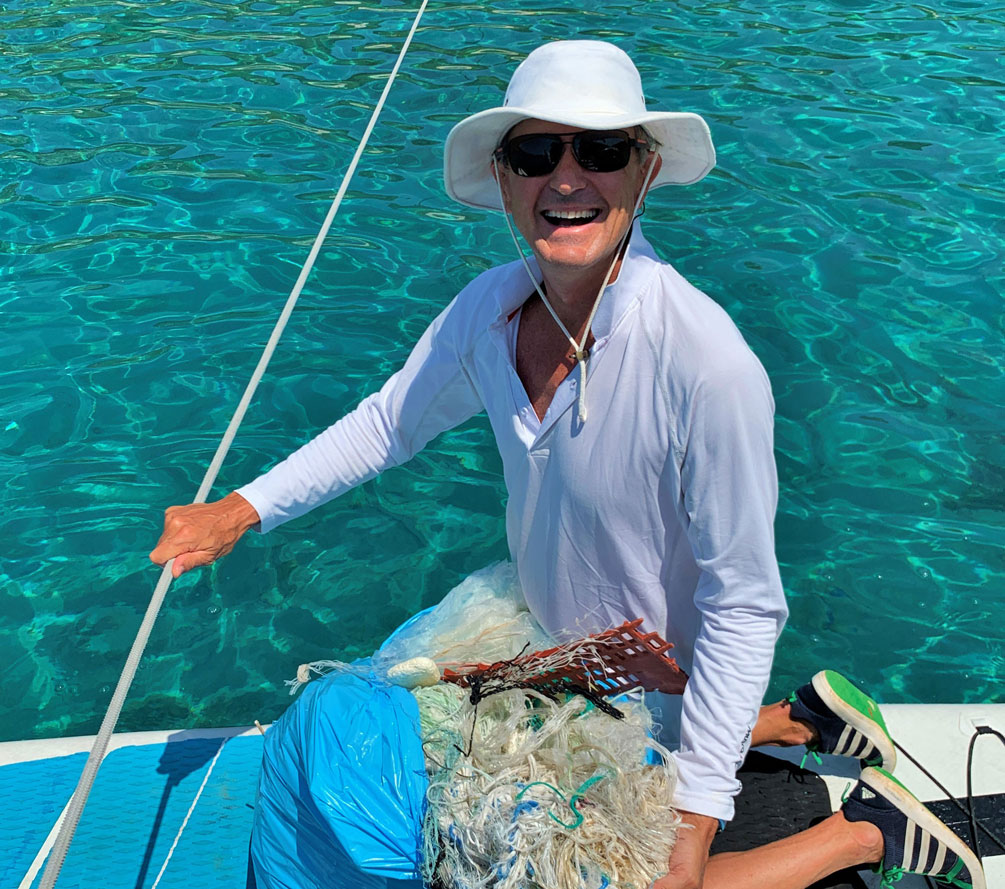 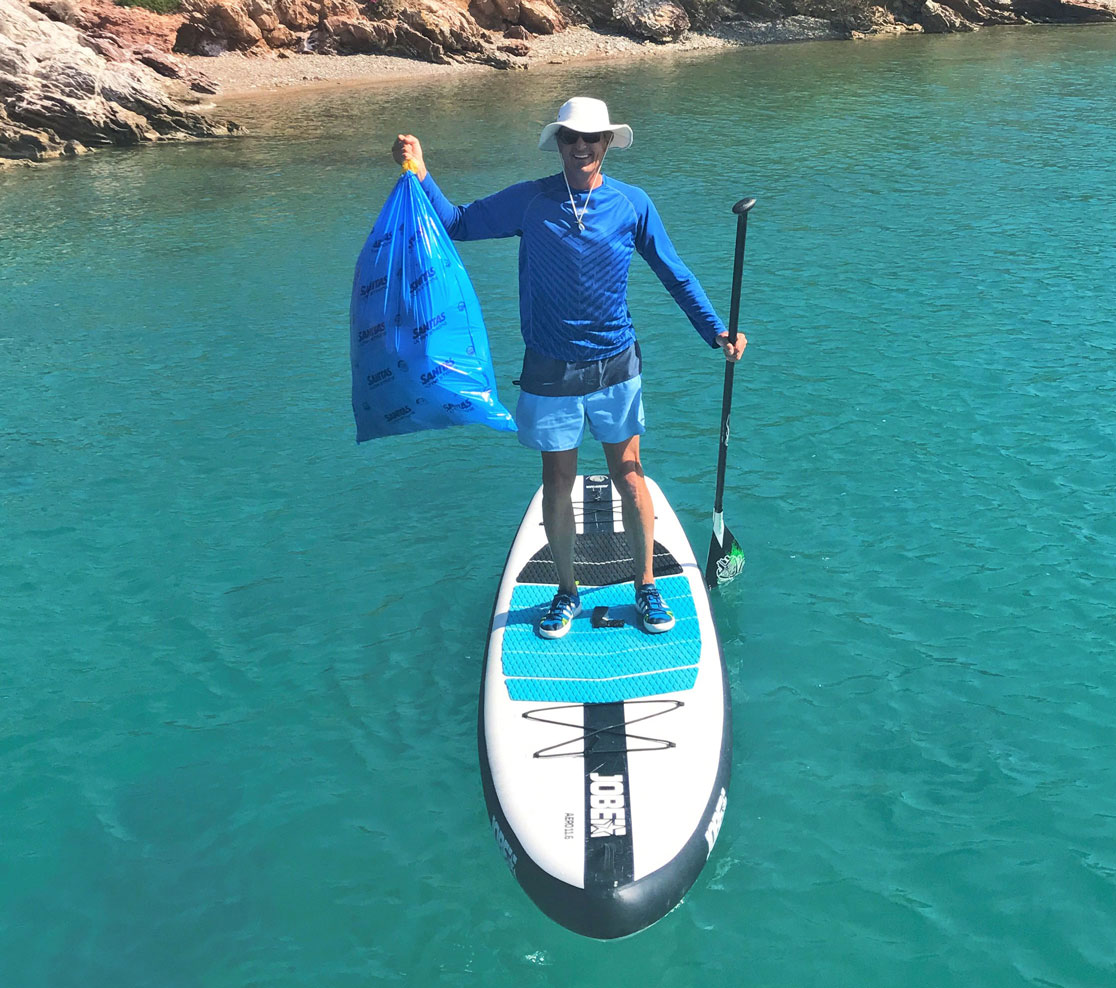 The idea is really simple. By cleaning the anchorages we are in, we immediately improve the environment for the marine creatures and we are rewarded by being able to enjoy the sight of more pristine shorelines.  By posting the exact location on our website and to social media, we are ‘paying it forward’ for other sailors who will have a more pleasant experience anchoring there after us. It’s a virtuous circle – what benefits me also benefits my fellow man.

Catherine is onboard with me all the time and has helped collect the plastic trash in Greece and Turkey over the last three seasons we have sailed there. Our eldest daughter Sarah-Jane is about to graduate from the University of Cape Town majoring in Marine Biology, so she is also passionate about the ocean. We see that the younger generation, like our 21-year-old daughter Emily, is much more aware and passionate about environmental issues than we were at their age. This is a very positive sign for society’s future.

When you live onboard a boat, you are much closer to nature and to the challenges of water, energy production and waste removal than when you live in a city. On land, water magically comes out of a tap, and when you discard whatever you consume it disappears in a garbage truck and you don’t have to think about it again.

In addition to our concern for plastics littering the world’s oceans, we recognise there are numerous other pressing environmental issues to be tackled. We wanted to create an identity for this project, so we registered the u-turn.earth domain and created the U-Turn.earth Instagram account.

Going forward, we would like to develop a collaborative website where others can post good news stories on environmental issues and add images to an interactive map with the exact location of “Trash Tuesday” clean-ups they have completed. Up till now, we have only created the Instagram account, but we have many ideas for this project in the future.

Your cruises are also punctuated by stunning destinations, out-of-the-way places and new friendships with other Fountaine Pajot Owners. Could you tell us more about this?

Absolutely. We have made some really good friends by meeting other sailors along the way, as well as via social media and our website. Fountaine Pajot has a very loyal group of Owners who love to meet and chat about their shared experiences. After a chance meeting at an anchorage on Agistri in the Saronic Gulf of Greece in 2017, we became good friends with Matthew and Julie from the Helia 44 Maleficent. We are sharing ideas to see if we can sail together in 2020.

Just before Catherine and I left Lady Roslyn to return home to South Africa after sailing for five months during the 2019 summer season, we met up with Michael & Marita from Lucia 40 Let’s Dance (soon to be taking delivery of their new Elba 45). We had been Facebook friends and had tried to meet for over a year but kept missing one another. When we did, we were like old friends and the conversation was easy. That’s the Fountaine Pajot family.

We have made quite a number of new friends via our website and our Facebook page. Our tagline is “Sharing the lessons we learn on our journey”, and we love to share the ideas which we have found improve our lives onboard. We have enjoyed helping new Saba 50 Owners with all their questions during the build process and have loved staying in touch with them once they have launched and are also out there sailing. 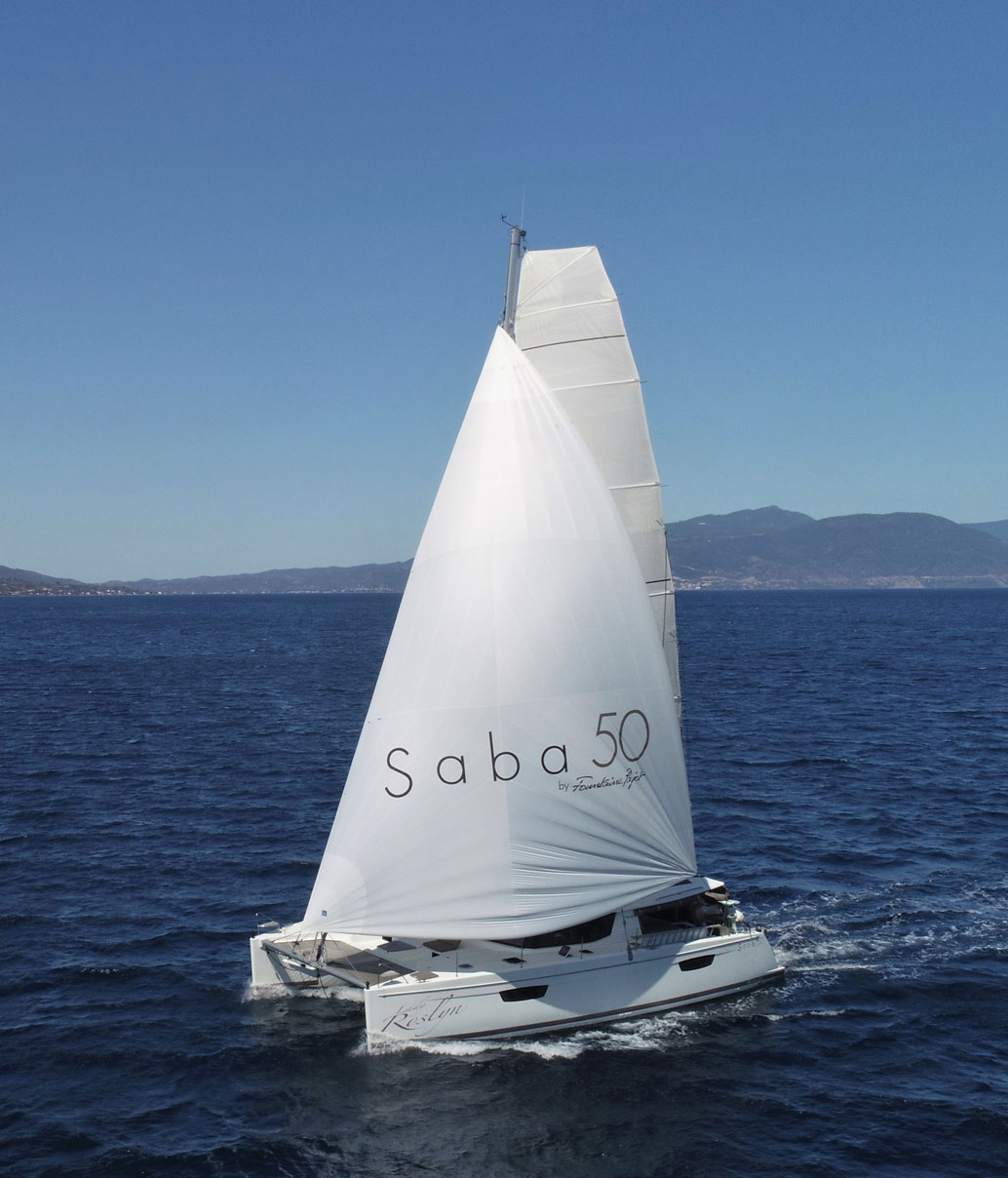 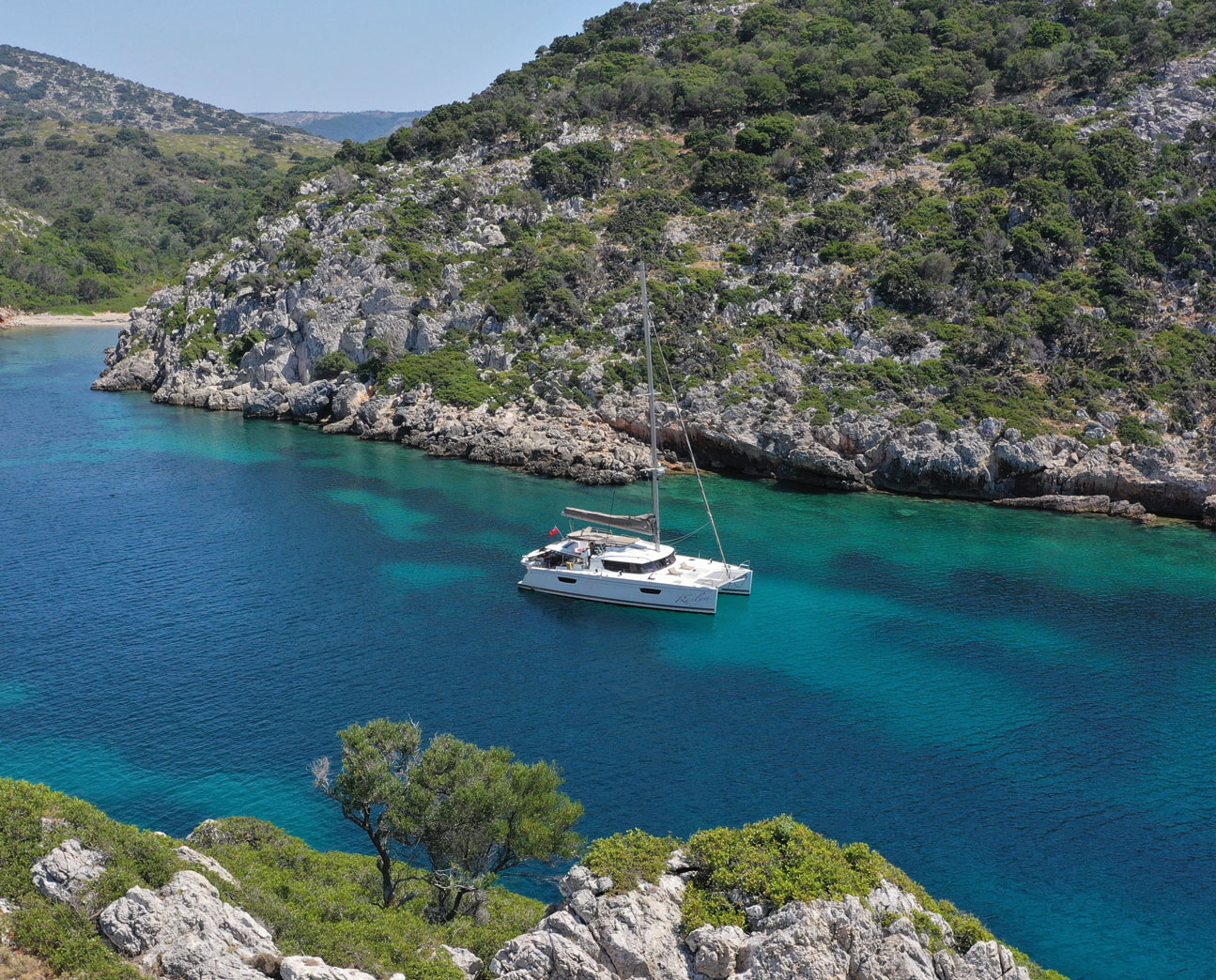 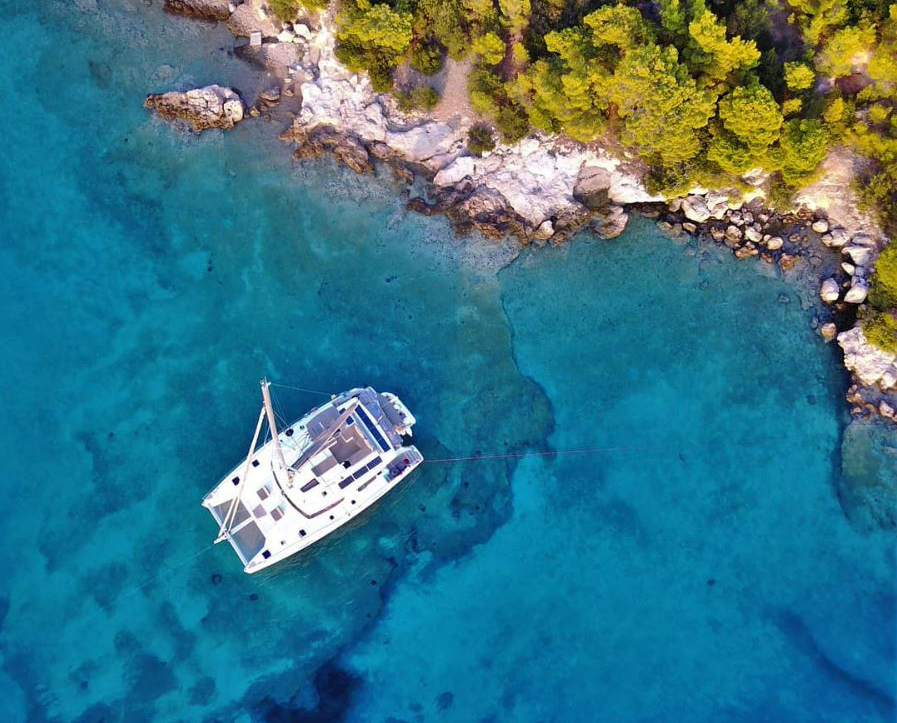 This year, you set sail to the Med for a 5 months period, what was your sailing route?

We set off from Fethiye in Southern Turkey in early May 2019 and did a large clockwise route around the Aegean Sea. We crossed the Cyclades, sailed up the Evia channel route to the Sporades. Then we travelled northwards to the Halkidiki region and the incredible Mount Athos peninsula before sailing south through the eastern Aegean and Dodecanese islands. After five months of cruising, we returned to Turkey for the winter.

There were so many incredible anchorages we discovered during the 2019 season. We love to look for those out-of-the-way spots, which are not necessarily in the Pilot Book, and we usually prefer to be at anchor rather than being in a marina or against a town quay.

What’s been the best mooring places you discovered this summer?

If I had to pick the three best anchorages we discovered for the first time during the 2019 summer, they would be:

The southern tip of Arki in the Dodecanese. The water there is the most incredible blue you can imagine, and there are no roads, houses or signs of human habitation. Just the way we like it.

The island of Kira Panayia in the Sporades. Even though you are only a short sail from Alonissos Island, you feel very removed from civilisation. There are no houses or tavernas on the island and there is no cellphone reception, which just adds to the special experience. The two big bays – one in the north and one in the south of the island, are both incredibly beautiful. There are also some very special coves for day anchorages along the western coast (in one, we saw something we have never seen before).

An anchorage in the Sporades, which I prefer not to name. The water there was shallow with a sandy and rocky bottom that was very blue. However, what made the anchorage so memorable was that we were incredibly lucky to see not one, but three Mediterranean Monk Seals when we woke up in the morning. This is the rarest seal (pinniped) in the world with only 700 individual animals estimated to be in existence worldwide. There are reported to be only around 250 individual Mediterranean Monk seals remaining in the entire National Marine Park of Alonissos and the Northern Sporades.

Where do you plan to go next year?

The original plan when we bought Lady Roslyn four years ago was to be leaving the Mediterranean at the end of the 2020 sailing season to sail westwards to the Caribbean.

However, we are having so much fun here that this plan has been put on hold indefinitely. We know that once we go west, it will be virtually impossible for us to come back to the Mediterranean, so we have decided to slow things down even more and really explore the various areas we visit.

One possibility we have discussed for next year is to sail along the southern Turkish coastline to Cyprus and then to Lebanon or Israel. Another is for us to go south to Crete and then back to the Ionian Islands and Croatia, both areas which we love.

‘’That’s the beauty of having your own yacht. The world is your oyster and that is why you will find on our website homepage the words “We travel not to escape life, but for life not to escape us”. 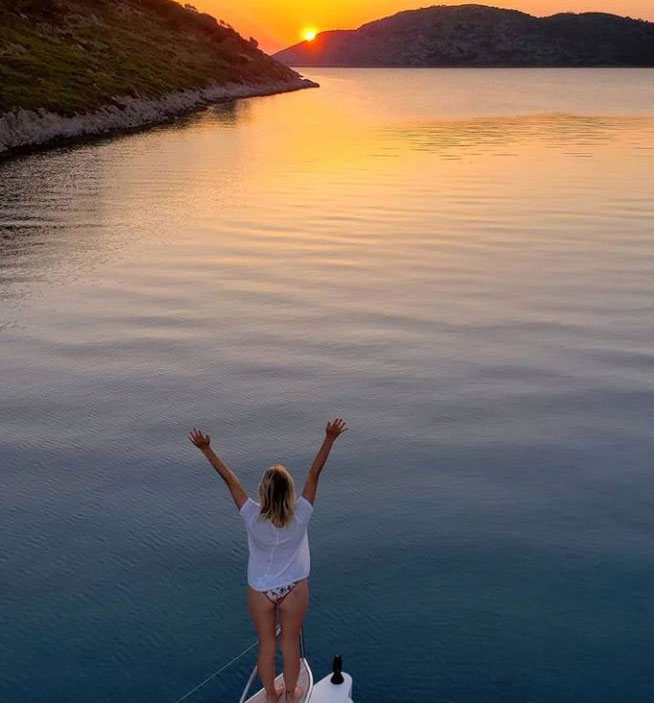